Good morning blog readers, show week has now arrived and we thought we would take you on a trip down memory lane to Encore’s first production of Jesus Christ Superstar.

Tickets are available here for our 2017 production starting this week! 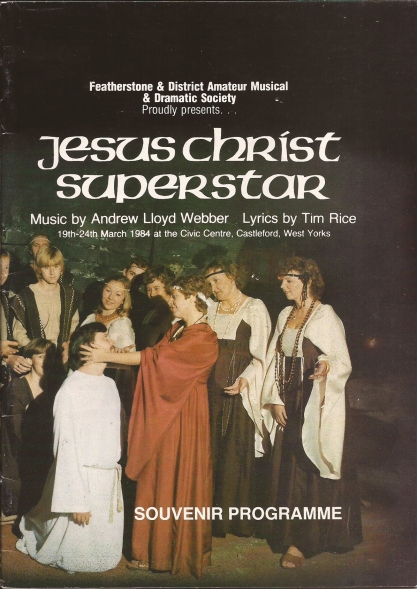 When Jesus Christ Superstar was first released for amateur theatre groups in 1983, the then Featherstone & District Amateur Musical & Dramatic Society immediately applied to the Robert Stigwood organisation for a licence to stage a production.  We were advised that all applications were under review and we would be contacted in due course with a decision; the acknowledgement letter was signed by a David Land.

David Land was an impresario and theatre producer, best known for having developed the early careers of Tim Rice and Andrew Lloyd Webber.  He played a key role in their production of Jesus Christ Superstar and went on to manage many of their early shows and the successful runs in London’s West End.

Having not had a reply after a few weeks, our Secretary at the time decided she would telephone the office of the Robert Stigwood organisation and quite innocently asked to speak with David Land, unaware as to his prestigious status in the world of theatre.  The reception asked the purpose of the call and she explained she was calling on behalf of Featherstone & District Amateur Musical & Dramatic Society.  She was put through direct to David Land, who asked “Are you the same Featherstone who won the Challenge Cup at Wembley on Saturday?  I was there and what a game it was!”

Featherstone Rovers RLFC had played Hull FC in the Challenge Cup Final and had won 14:12; it was considered one of the biggest upsets in Rugby League history at the time.

When David Land realised it was the same town, he immediately agreed there and then to grant the Society a licence on a date of our choice and we subsequently staged the North East Amateur Premiere of Jesus Christ Superstar in 1984, a challenge production at that time for our Society, but one which is still remembered fondly by our then members and audience.

The current production, running from 7th to 10th June, stages the traditional story of the last week of Jesus’ life in a much more contemporary style, but includes all the much loved songs including ‘I Don’t Know How to Love Him’, ‘Heaven on Their Minds’ and ‘Hosanna’. The talented cast and production team continue to build on Encore’s reputation for staging innovative and memorable shows, making this a show not to miss.